Aktuelle Seite: Startseite / Translations / english / Against you and your friends! – Against the conspiracy of fascists and capital!

In the midst of the global corona crisis, a new street movement is taking place in Germany and Austria. The composition of these so-called „hygiene demos“ form a cross-class alliance from liberals to neo-Nazis. In between there are anti-vaxxers, hippies, followers of crazy social-media influencers and D-List celebrities. At first glance, it’s against the erosion of fundamental rights during the current pandemic. But the wild mixture of „corona rebels“ is united above all by the anti-Semitic notion that a certain group, cosmopolitan and globally networked (WHO, science, etc.), is controlling and targeting the worldwide pandemic. The actual misuse of the pandemic to reduce fundamental rights, such as further restrictions on the right of asylum or employment protection, is hardly an issue. Nor does it have anything to do with criticism of the contemporary society.

As nice as it would be if there was the „right“ discontent, which is only directed to the wrong address – unfortunately this is not the case. Concrete resistance against the softening of basic rights and social injustice, like #LeaveNoOneBehind and #Pflegenotstand [actions against the crisis in Care], is necessary especially during the pandemic – the anti-modern marches of esoterics, fascists and frustrated people are not. On the contrary: they are, to make matters worse, door openers for AfD in new milieus. In this way, they manage the feat of being more reactionary than the government in the face of a multifaceted crisis of capitalism.

It is high time to do something to counter the weekly growing madness on the streets nationwide. The anti-fascist left must now show Solidarity-based alternatives to this insanity and take action against the gatherings themselves. Be it on the street, on the web or in the everyday life of this new crisis normality. Investigate, protest and intervene against it! 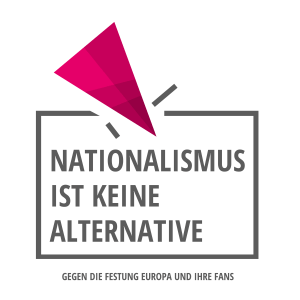